by Richard G. Weigand, CET and Michael R. Weigand
Overview
Developing and maintaining good floc structure is critical for proper mixed liquor settling and ultimate clarification. The flocculation of mixed liquor solids within the aerobic process and the subsequent de-flocculation due to downstream agitation or pumping can dramatically affect clarifier performance and effluent quality.

This procedure describes a methodology where a Phipps & Bird JarTester™ (six-paddle stirrer) can be used to evaluate the flocculation and de-flocculation ability of a mixed liquor. A six-paddle jartester, commonly found in a drinking water plant lab, is used to stir mixed liquor samples. Various mixing schemes are applied to both typical and agitated samples. After settling, TSS and turbidity analyses are performed on the supernatant to assess the impacts of mixing on effluent quality. Conclusions and practical plant applications are described.

Introduction
The basic principal behind all activated sludge type wastewater treatment processes is the growth of microorganisms that colonize into settleable floc particles. Under ideal conditions these floc particles are allowed to settle forming a sludge blanket and leaving a clear supernatant free of organic material and suspended solids. Floc particles can vary greatly in size and density due to a variety of treatment factors. Mixed liquor floc particles can be subjected to a wide range of environmental, mechanical and chemical factors which can influence their settleability.

In an effort to simplify the evaluation of mixed liquor flocculation and potential de-flocculation a six-paddle jar tester can be utilized. Such equipment is widely used in the water treatment process to determine proper dosages of coagulants. An easy methodology has been developed that can provide useful operational information in addition to such traditional process control tests as MLSS concentration, SVI and 30-minute settleometer. 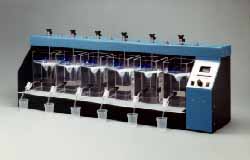 After agitation and/or stirring, all six jars should be allowed to settle for 1 hour. Mixing and agitation should be sequenced to insure that all the jars begin settling at the same time. A possible timing sequence is outlined in Table 2.

Using a ruler, measure settled sludge depth, and then decant the supernatant from each B-Ker² with a 100-ml pipette and a rubber bulb into each of the six 150-ml beakers. (To minimize turbulence, do not use the B-Ker²’s built-in sampling ports). Be sure to label the samples to avoid confusion.Measure supernatant Total Suspended Solids using Gooch crucibles in accordance with Standard Methods 19th Edition (1) procedure #2540D. For comparison, remove another 20-ml aliquot of supernatant from each sample for turbidity measurement. To agitate samples for Jars #3-6, use a 4-liter plastic jug and shake vigorously by hand for the prescribed time. Use a turbidity meter after performing a linear calibration using primary standards. Conventional settleometer tests should also be performed on the mixed liquor samples for comparison with the results from Jar #1. Perform mixed liquor suspended solids and sludge volume index analyses as well. Record all data on a bench sheet similar to the one attached to this article.This method demonstrates that a simple jar test procedure can be used to evaluate the brittle structure of activated sludge flocculation. The de-flocculating and re-flocculating nature of the mixed liquor is a result of such factors as floc size, density (as it relates to sludge age), and presence of filamentous organisms.Operations personnel can apply their test results to their facility in any number of creative ways. Samples could be collected at various points in the process for evaluation: in multiple aeration basins, transfer troughs in route to clarifiers, clarifier inlet points, and before and after mixed liquor pumping stations. Aerobic digesters can be sampled to evaluate fast and/or slow mixing schemes. Sequence batch reactors could also be examined to determine the benefits of various aeration and mixing combinations prior to effluent decanting.Operators are encouraged to use this basic procedure as a starting point to develop their own jar testing scheme and to include the results as part of their overall process control strategy.The procedure outlined in this paper originally appeared in an article titled “Tending the Floc” that was published in the December 2000 issue of Water Environment & Technology Magazine. The authors graciously edited, revised, re-formatted and modified the information and have granted Phipps & Bird, Inc. permission to publish and distribute it for promotional purposes. This version is made available to the public domain at no cost.

About the Authors:
Richard G. Weigand, CET is the Director of the West Virginia Environmental Training Center in Ripley, WV and holds a Class III Wastewater Operators License in WV. He has a MS Degree in Environmental Science from Rutgers University and has 23 years of plant operations and training experience.Michael R. Weigand was a lab/computer technician serving a summer internship at the West Virginia Environmental Training Center. He is currently a Biochemistry major at St. Vincent College in Latrobe, PA.