Phipps & Bird is continually on the lookout for new products and accessories to add to our product lines. If you have an idea, concept, suggestion or even a working model of a product that would fit within our existing product lines, we would love to take a look at it.
If it’s something we elect to commercialize, we’ll provide you attribution (tell the world it was your idea) and reward you appropriately.
If we choose not to commercialize your idea, we’ll still be happy to post it on our website if you’d like to share it with your colleagues. We’ll even send you a small token of our appreciation.

This is a great opportunity to dust off that idea you’ve had, send it off to us and take a shot at experiencing the satisfaction of seeing it develop and grow.
Email, mail or telephone your ideas to us . . .
We’re anxious to see what you’ve got!

Here are a few examples of what we’re looking for . . .
JIM KING (Tuolumne, CA). . . made the suggestion that we offer a black panel to be installed behind jartesters (stirrers used in the water and wastewater treatment process) to provide a dark field against which to view floc formations without distraction. Jim had been successfully using a black-painted piece of cardboard for several years, and passed the idea along to us. Today, every jartester we manufacture features a built-in black panel, and retrofit models are available to fit jartesters out in the field. A simple but effective device of which water plant operators around the world are receiving the benefit.

WALT RAMEY (Richmond, VA) . . . had the misfortune of experiencing kidney failure and had to go onto Continuous Ambulatory Peritoneal Dialysis (C.A.P.D.). The procedure requires the periodic (several times each day) infusion of warmed dialysis solution into the body. Walt also liked to travel. His resultant Portable Dialysate Warmer has permitted several thousand C.A.P.D. patients to experience life with a new level of freedom.

SKIPP DELEVE (Mentor, OH) . . . likes to do things efficiently. And the most efficient way to conduct a jartest is to dose all six jars simultaneously. Skipp suggested an improved version of our existing Doser Bar: We’re in the process of commercializing it and should have it available soon. Call us and ask about the NEW & IMPROVED Simultaneous Doser.

Hampton “Doc” Rexrode arrived on this planet on February 23, 1907. He grew up in the mountains of Highland County, Virginia and attended Berea College in Kentucky. On July 26, 1930 he joined the fledgling scientific apparatus maker Phipps & Bird (for room & board, without pay) where he spent the next half century as the company’s chief creative force. Doc was an inventor. A physicist-machinist-engineer-electrician-tinkerer-troubleshooter, Doc 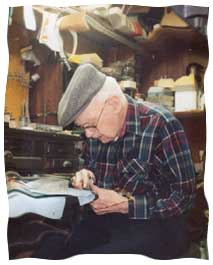 loved nothing better than to be given the opportunity to solve a problem by developing a piece of equipment to do the job. His contributions in the areas of water treatment, physiology and medical apparatus earned him six patents over the course of his career. Doc loved his work. “Work is play”, he told a Richmond Times-Dispatch reporter during a 1992 interview. “I’m the luckiest man in the world. From the time I started working in this field in 1930, I had fun. I just ate it up.” After 50 years of faithful service, Doc was given a formal retirement party in 1980 by the senior management team of General Medical Corporation, Phipps & Bird’s parent company. It was a complete affair, with guest speakers, VIPs, gifts and a reception. It was all very nice and flattering to Doc, but equally perplexing since he hadn’t indicated any desire to retire. Doc was right back at his desk the next day. He was 73 at the time. Doc finally agreed to “officially” retire on November 22, 1985 at the age of 78. His “job”, designing laboratory layouts, was interfering with his “work”. So, although retired, he continued his association with local schools and colleges teaching teachers and students alike about scientific apparatus. He started up a little biomedical equipment repair shop, repairing equipment for local clinics, hospitals, labs, schools and doctors. And he continued to contribute new product ideas and serve as a technical consultant to his colleagues at Phipps & Bird. Doc’s clock stopped on Thursday, August 27, 1994 at the age of 87. He was seated at his workbench, working on a project at the time. ” . . . nothing will substitute for work, hard work. You can play all you want to, but you’ll get no results. I believe that the Creator intended mankind to work hard. It doesn’t matter what you do; there’s dignity in anything you do.” Hampton Rexrode, 1992.

It is in memory of Doc Rexrode’s spirit of wonderment, enthusiasm, ambition and creativity that we dedicate this site.