New INTELITOOL Module Introduced – Thursday, October 01, 2015
Cardiocomp 3D is the newest addition to the Intelitool line of educational physiology software. Based on the original Cardiocomp platform, Cardiocomp 3D employs technology developed by ECG-Tech Corp. to offer three-dimensional visualization of cardiac function. Click on Science Education. When the Intelitool Version 8 drop-down menu appears, hover the cursor over it to display the link to Cardiocomp 3D and then click on it.

August, 2005 – Rick Marshall and his band, The Phifer Marshall Band, won the 2005 River City Blues Society Blues Competition, held in June. Their prize: They will represent Richmond at the National Blues Competition in Memphis in February, 2006!

In July the band released their first cd, “Powerhouse Blues.” (Rick, the band’s lead guitar player, is the dapper dude sportin’ the fedora in the photo below). 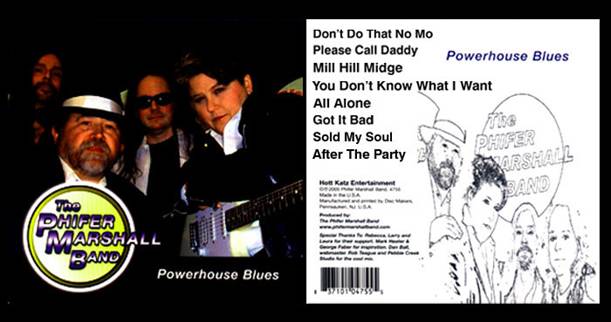 The Phifer Marshall Band can be heard several weekends each month at a number of blues venues in Richmond and the Tidewater area. Click on the icon below to visit their website to listen to a few tracks, check their play dates or to order a copy of their Powerhouse Blues cd . . .

Congratulations Rick, Mattie, Greg and Dave! Rock it to ‘em in Memphis !